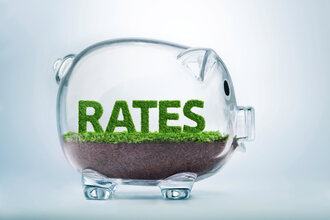 Banks and Commentators alike are saying this week; “The next move on rates is UP – You must lock in now!”

What complete twaddle! (Commentators are back at work after the holidays and feel the need to say something to start the year, banks however, are saying things out of complete self-interest).

In Yesterday’s Minutes – where rates were left on hold, he SAID…

The Australian 3-year Bond Rate had started to creep up to 0.12% and because that rate is so HIGH, money was flowing into Australia pushing our dollar UP (now almost 77c).

That is the main game – keeping our dollar low by ensuring rates are in keeping with almost zero rates overseas.

The Reserve Bank Governor stated that he will continue to purchase Aust Govt Bonds with another $100bn in April.

So official rates are around 0.1%.

Variable rates are at around 2.4% – 2.6% (because when banks fund variable rate loans it is from buckets of funds borrowed previously at higher rates). As these buckets roll over in the coming year or so cost of funds to banks will continue to fall.

And hence commercial pressure will be on banks to lower their variable rates down to 2% and lower.

What does this mean? People who borrowed FIXED at 3.8% two years ago – saying “rates will never go any lower” – well how silly were they!

I grant you it is very difficult to see fixed rates falling significantly below current – BUT – that does not mean you have to fix to achieve either certainty or low rates.

A variable rate from a bank who has a written agreement with me to reprice my clients existing loans back to their new client offer is as certain as you need things to be.

Your response is as it always has been; choose a bank that has a fair repricing agreement with me and reap all the benefits of variable.